Lab-created (or Lab-grown) diamonds have been around since the 1950s, but they’ve only really started to make a big splash in the jewellery world in recent years. Before 2015 they were a curiosity. Now they’re mainstream.

What are lab-created diamonds?

What are the pros and cons of Lab-created vs Mine-origin diamonds?

How does Lab-created stack up ethically?

Are lab-created diamonds value for money?

What are lab-created diamonds?

Lab-created diamonds are chemically and (mostly*) optically identical to diamonds that come out of the ground.

The only practical difference between lab-created and mine-origin is that one was created in nature underground millions of years ago and the other was created in a factory perhaps only a few months ago. 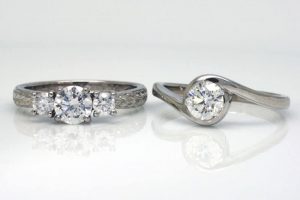 To tell them apart you need access to some very specialised testing equipment and the casual observer certainly can’t pick the difference—as none are visible to the naked eye.

*The main difference between the two is inclusion types. Unless they are a low clarity diamond, this is not something you can detect with the naked eye. In the early days of CVD grown diamonds you could sometimes see ‘growth rings’ under magnification. This ‘defect’ is still evident in some poorly grown diamonds today.

Both methods produce diamonds of the same composition as those originating through natural processes.

The whole lab-grown diamond industry was born out the need for clean, inexpensive diamond material for industrial purposes in optical and electronic applications. Of course, industrial diamonds are also used for cutting, polishing, drilling and grinding applications.

It’s only in recent times with advances in technology that the industry has been able to reliably grow diamonds large enough and ‘eye-clean’ enough to be considered jewellery-grade.

Producers are constantly refining their processes and now we’re starting to see not only fancy pinks and blues, but also large, ‘perfect’ multi-carat diamonds being produced.

The pros and cons of lab- vs. mine-origin diamonds

To say that opinions within the jewellery world are divided when it comes to lab-created diamonds would be an understatement.

A lot of misinformation is being tossed about the place. We’ll do our best here to give you an unbiased summary what’s good and not-so-good about each. (We sell both lab-created and mine-origin diamonds and we don’t particularly favour one over the other.)

What’s important to know is there are very strong pro-mine-origin and very strong pro-factory-origin people out there and both are happy to give you their particular versions of the truth. In other words, be careful who you listen to and take everything you hear with a grain of salt.

‘Natural’ or ‘Real’ vs Man-made/synthetic

There should be no confusion about the fact that mine-origin diamonds are natural (of nature) and lab-created diamonds are man-made. No one debates this. But only you can decide whether or not that’s important. 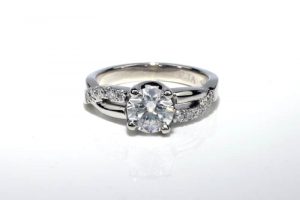 Lab-created diamonds have a lot going for them – especially when you choose a responsible manufacturer – and there are significant savings to be had.

In terms of how either looks and performs optically, there’s not a lot of difference between the two. The main differences are that they can have different inclusions and mined diamonds can exhibit fluorescence whereas lab-created don’t.

The term ‘real’ however, is a grey area.

Lab-created diamonds are diamonds—chemically and optically. It’s just that they weren’t formed underground. Whether that makes them ‘not real’ is a matter of opinion.

In our view it’s reasonable to describe one as man-made and the other as natural and leave the term ‘real’ out of the conversation as it causes too much confusion.

Likewise we tend to avoid the word synthetic because most of us are familiar with synthetic fabrics like polyester and rayon that are completely different in chemical make-up to the things they’re meant to replace. This is not the case with lab-created diamonds and again, it’s confusing.

Because lab-created diamonds haven’t been around long enough in the jewellery world, no one really knows how they will perform in the long term in relation to resale or retained value.

At this point it’s probably safest to assume they’re unlikely to appreciate in value.

Mine-origin diamond producers claim that their product retains its value much more than lab-created, and this is true  comparatively. But it’s only extremely rare, or otherwise exceptionally fine natural diamonds that appreciate in value to any great extent.

You only have to go shopping for second hand jewellery to know that ’regular’ diamonds do not hold their retail value, much less appreciate.

This is the catch-cry of the mine-origin Diamond Producers Association. But ‘rare’ is a very subjective term.

It’s public record that the mining industry produces around 35 million carats of jewellery grade diamonds each year, have been doing so for decades and will continue to do so for many years to come.

Amongst those hundreds of millions of carats of diamonds already in the market, a very, very small percentage are truly special and it’s those that capture the media attention and the eye-watering prices. The majority of the rest you might as well think of as grains of sand on a beach. Each grain is different, but that doesn’t make it ‘special’ in the way marketing would have you believe.

Mine-origin producers point out that lab-created diamonds are mass produced and could theoretically be grown in vast quantities, but we’re a long way from that point. At this stage, lab-created only represents about 3% of supply to the jewellery industry and forecasts are it will be 2035 before that number grows to 7-10%.

In short, some natural diamonds are indeed extremely rare, but most of us don’t have pockets deep enough to afford them.

These are very subjective, intangible qualities usually only ascribed to mine-origin diamonds.

Let’s face it, there’s nothing particularly traditional or romantic about a factory-produced item, but then again large-scale mining operations aren’t especially pretty either.

Who knows, if you’re a big fan of technology, maybe the idea of man-made is romantic to you?

As for tradition, diamonds first appeared in jewellery in a matrimonial context in the 1500s but didn’t gain popularity as the gem of choice for engagement rings until the 1930s—less than 100 years ago.

Does this make them ‘traditional’? That’s up to you to decide. 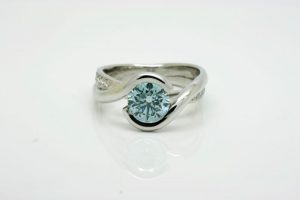 The blue lab-created diamond in this embrace-style engagement ring cost several thousand dollars, so not exactly cheap. By comparison, an equivalent mine-origin blue diamond would cost tens of thousands, making the lab-created product far more affordable for the average consumer.

Depending on your perspective, this can be either a ‘pro’ or a ‘con’.

It’s true that lab-created diamonds sell for about half to two-thirds the price of mine-origin equivalents, but this doesn’t necessarily mean they’re cheap. Large, high quality lab-created diamonds retail for many thousands of dollars and for most people that’s still a lot of money.

And when it comes to blue and pink diamonds, the lab-created versions are considerably more affordable with gap between them and mine-origin equivalents being even wider.

If you’d like to read more about lab-created and mine-origin diamonds, visit our Blog. You’ll find several detailed articles there where we’ve been monitoring the evolution of the lab-created diamond phenomenon.

Lab-created diamonds, from the right supplier, are an environmentally and socially responsible alternative to mine-origin diamonds – and they’re just as beautiful to look at.

We were led to believe lab-created were much more environmentally friendly, both from a greenhouse gas emissions perspective and from an environmental impact perspective. After all, lab-created diamonds come out of factories in already built up areas, not out of big holes in the ground often well away from civilisation.

On top of that, the diamond mining industry has a terrible human rights history spanning many decades and there are still far too many problems with criminal corruption, exploitation and conflict funding to suggest that the worst is over.

That’s not say things aren’t improving in the diamond mining world. They are. But there’s still a long way to go.

At this point it’s hard to argue that the diamond mining industry as a whole is more ethical than the lab-created diamond industry, because, in our view at least, it’s not.

There are exceptions however, and we consider our primary mine origin diamond supplier, Argyle Diamonds in Western Australia, to be one of those exceptions.

When it comes to environmental or habitat destruction, the short answer is ‘yes’, lab-created is greener, but when it comes to greenhouse gas emissions, we don’t really know—and that’s troubling.

How much more is the big question and it’s unlikely we’ll find out for sure any time soon.

The major culprit is electricity consumption and the emissions from the production of that electricity.

Currently there are no suppliers available to us that derive their electricity 100% from  renewables . We favour suppliers who use alternatives to coal-fired power and take steps to help offset carbon emissions. Find out more about what we do to ‘give back’.

Again, there’s heaps more information in our Blog about the ethical issues attached to the diamond industry.

Are lab-created diamonds value for money?

Whether or not lab-created diamonds are good value is a really tough question to answer because there are so many things to consider.

“Value” has a lot to do with your own personal view of the world, and what represents good value for you might not be the same for someone else.

If you’re undecided about lab-created diamonds, here are a couple of questions we think you might want to consider.

Probably the biggest criticism leveled at lab-created diamonds is no one knows how they will perform long-term when it comes to resale value. In many people’s minds that makes them a riskier purchase, but there are risks in purchasing mine-origin diamonds too.

Neither is a sure bet.

As we said above, no one really knows how well lab-created diamonds will resell in the future. Maybe not very well, or maybe they’ll prove to be desirable because they’re considered to be better environmentally. Only time will tell.

What else could you do with the money?

No one really talks about this, but when buying like for like you’re going to pay at least 30% less for a lab-created diamond compared with an equivalent mine-origin diamond.

If you wanted you could invest that $3,000 in a managed fund perhaps, or it could go a long way to paying for a chunk of your honeymoon. Either that or you could use it to pay off some debt or do a whole bunch of other things.

The point is, you can do what you want with that money NOW. You don’t have to wait until some unknown time in the future to maybe get some of your money back.

We think it’s an important consideration that should be weighed up along with everything else.

So, are lab-created diamonds value for money?

In the current economic climate where money is tight for most people, properly sourced lab-created diamonds are a sound and ethically responsible alternative to mine-origin diamonds. They also happen to be a good bit less expensive.

If you look at them from a ‘bang for buck’ perspective right now, they’re hard to beat.

Will you get your money back in the future if you need to?

Probably not, but that’s true for a lot of stuff we buy like cars, furniture, TVs and all manner of things, so perhaps resale value shouldn’t be quite so high on our list of concerns?

The thing is, you and your partner will get to enjoy that diamond or diamonds everyday for years to come, and that has to be worth something. And if you didn’t have to stretch yourself financially to make it happen, more’s the better.

We’ve carefully selected several suppliers of lab-created diamonds, all of which reliably deliver a high quality product. (We use more than one supplier to ensure we have a good selection available of sizes, gradings and cuts.)