How to design your Wedding (or Commitment) Rings – Part 1 Unless you’ve already been down the path of buying a wedding or commitment ring, you’re probably under the impression that there’s not much to it, right?

I mean, it’s just a simple ring isn’t it? How hard can it be?

Truth is, for some people it is really simple. But for many, a whole lot more thought and effort goes into the design and making of the perfect wedding/commitment ring.

So much in fact, that we’ve written a whole guide to the process.

Not convinced there’s that much to it?

Below you’ll find an extract from our Ethical Wedding & Commitment Ring Buyer’s Guide. It’s the first one of seven important design considerations – all about the how much it’s going to cost.

Over the coming weeks we’ll be publishing more extracts from the Guide so you can judge for yourself whether it’s worth getting your own copy. (Of course, if you don’t want to wait, you can always download your free copy here.)

The ring you wear on your wedding finger is something you’ll probably wear for the rest of your life. You might even hand it down to your children or your children’s children. We think it’s worthwhile taking this into account when working out your budget.

Of course, for some people a wedding or commitment ring is purely functional, little more than a way to communicate they’re in a committed relationship. Others want their ring to be more than that. Not just a symbol, but also a thing of beauty they’re proud to wear – perhaps even meant to complement or even complete an engagement ring design.

Either way, you’ll want your ring to be comfortable and durable. It should be able to withstand the rigors of everyday wear.

As you are about to see, these considerations (and a lot of other things) influence cost.

Many of our customers embellish their rings with precious stones and diamonds, but let’s start with relatively simple metal-only rings.

There are six things that influence cost:

So, all that said, let’s see if we can give you a guideline. Bearing in mind metal prices change with movement in the exchange rate and international markets. 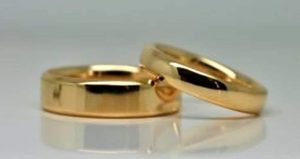 All of our rings are made by hand, so we don’t have ready access to pricing for pre-made rings, but the following table will give you an idea of how much prices can vary just for a simple ring.

As you’ll see, size and design can make quite a difference …

How much is that wedding ring?

Please Note: The above prices were correct as at mid-April, 2019. To explore more pricing options, you can visit our Classic design price calculator here. You can get current pricing for a variety of popular textures and designs in different sizes and metals. (We even explain how you can quickly estimate your ring size.)

Engraving is a popular way to add an individual touch to a ring.

Words and numbers are usually priced at a rate of around $3.50 per letter/numeral.

When it comes to engraving patterns however, the cost depends entirely on the complexity and coverage of the design.

You could spend as little as $35 or upwards of $450 for something intricate.

‘Fitted rings’ are those made to wrap around a design feature on another ring worn with it (usually an engagement ring).

They can be relatively simple to create, or it can be a big challenge depending on the design of the engagement ring and the wedder itself. Either way, it’s going to be handmade.

Budget at least $900 for something simple in 18-carat gold and go up from there. (Getting a quote is the only way to get a meaningful indication of price.) As you can see, fitted wedding rings can take many different forms and pricing can vary from hundreds to thousands. It’s best to have a chat with us so we can give you a quote.

It’s very common for us to make wedding rings that include diamonds and gemstones to match the design of the wearer’s engagement ring.

But it’s also common for us to make rings like this that are worn on their own. Some people will choose to design a ring that works as both their engagement and wedding ring.

Here are some examples of gem-set rings often worn with an engagement ring or as commitment rings on their own.

Usually the stones set into a commitment or wedding-style ring are smaller than the central feature stone in an engagement ring. That said, you can still spend a lot if you go for high quality diamonds or rare, very precious coloured gemstones.

Rings from the top row of the above example start at $1,100.

Spending $8,000+ on this type of ring will probably mean you’ve invested in a relatively large number of very good quality diamonds or a very small number of pink diamonds or another type of rare and expensive gem.

Larger embellished rings – usually worn on their own

In terms of budget, you could spend $1000 – $2000 for something with a small diamond of a few small gemstones and a bit of engraving like the ones shown on the top row above.

For the bigger more elaborate styles with significant diamonds and gemstones and lots of handwork, their prices tend to start at about the same point as a low-cost engagement ring – around $2,000 to $2,500. (Though the finished price does depend a lot on the choice of stones.)

Something with a largish central diamond would start at $4,000.

A multi-diamond ring like the Celtic example above is completely handmade and involves a lot of labour, metal and diamonds. Something like that you could expect to pay from $7,000.

~ Click the button below to request your free copy of ~