The marketing ‘war’ going on right now between mine-origin and lab-grown diamonds is fascinating to watch and a lesson for anyone wanting to break into a well-established, old school marketplace – or defend it.

If I didn’t know better, it’d be easy for me to think the whole discussion around lab-grown diamonds vs mine-origin diamonds has developed its own gravitational field.

Just when I’m about to broach a different aspect of the jewellery industry, something pops up to suck me back in to the argy-bargy going on between the two camps.

And make no mistake, it is argy-bargy (a noisy quarrel between participants in an argument).

Why do I care? 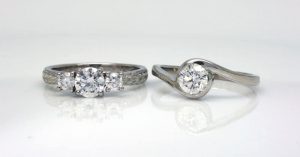 The ring on the left features lab-grown diamonds. The one on the right, an Argyle mine-origin diamond. Consumers can’t tell the difference just by looking at them, so how else do you set them apart?

First, let me make it clear I don’t have a foot in either camp.

And, to a large extent, I really don’t want there to be a winner and loser. My preference is for both to win. There doesn’t have to be a loser.

So, what do I care about?

What I care about is whether our customers are getting good information so they can make rational decisions about which is right for them.

I’ve said it before, and I’ll say it again. Ethics is a personal thing.

In the context of lab-grown and mine-origin, some people have a problem with mining and some people dislike the idea of human-made. Either way, neither group can make good decisions with bad information.

What set me off this time?

One was an article  on benzinga.com shared on LinkedIn titled “5 Earth Day Reasons to Choose Lab-Grown Diamonds”.

The other was preparation work for an interview with an industry publisher that lead me to revisit a bunch of the negative issues associated with diamond mining.

You see, before I became involved in the jewellery industry about 12 years ago, I used to be a management consultant specialising in sales and marketing.

I lived and breathed marketing for the best part of 17 years – particularly for small and medium business. At least one thing experience like that gives you is the ability to see straight through lazy and surreptitious promotional material.

As a hitherto marketing professional, it’s disappointing but not surprising.

As a consumer advocate, it’s downright aggravating and frustrating.

It’s aggravating because of the obvious half-truths and the contortions of the facts. And it’s frustrating because of all the missed opportunities to do the job soooo much better.

In relation to the benzinga article, basically it was a press release a for Spence Diamonds (a jewellery company originating in Vancouver) that recently started selling laboratory-grown diamonds alongside their mine-origin diamond offerings .

Here it’s important that I stress I don’t have anything against Spence Diamonds. In many respects I’m inclined to say good on them for reading the market and being prepared to venture away from the mine-origin dogma plaguing that sector of the jewellery industry.

But what I do take issue with is the light-weight way in which laboratory-grown diamonds are sold as a more ethical alternative than mine-origin diamonds. As it happens, the Spence Diamonds PR piece is a perfect example of just how shallow the pitch is.

What are my problems with Lab-grown diamond marketing? 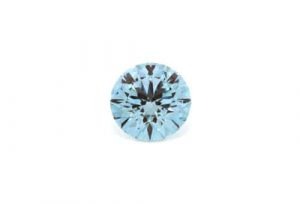 This stunning 1.43 carat lab-grown blue diamond is vastly more affordable than anything like it that might’ve come out of the ground. It’s no wonder lab-grown is getting so much traction in the market.

This criticism by no means applies to all lab-grown diamond producers, but let’s tell it like it is.

Lab-grown diamond producers have been very backward in coming forward with specific details about one of their key selling points – their supposed very low carbon footprint (relative to mine-origin diamonds).

Almost the entire sector has claimed this as a selling proposition without substantiating their own track record in this regard.

Collectively they’re basking in the glow of a few high-performers, consistently using vague terms like ‘eco-friendly’ to promote themselves.  Many are scoring undeserved points with consumers as a result.

The reality now appears to be that lab-grown diamonds could easily have the same, or an even worse carbon footprint than mine-origin, depending on where the energy used to grow them comes from.

Likewise, there’s rarely any mention about the diamond cutting and polishing side of things, nor conditions for the jewellery manufacturers.

These latter issues are ignored most likely because they’re below most consumer’s radar.

And when it comes to condemning the mining industry, sweepingly vague claims are made about things like workplace health and safety and conflict funding when industry insiders know these issues only really apply to a small percentage of diamonds in circulation.

Mind you, none of this is to say the mining industry doesn’t deserve criticism. It does.

The mine-origin industry needs to lift its game 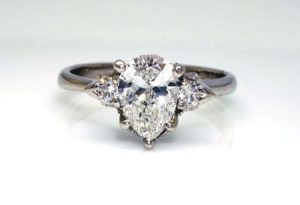 This trio of Argyle mine-origin diamonds, apart from being beautiful, have a very positive back-story to support them. Why not tell it?

My issue for today is that the mine-origin industry and the jewellers and retailers who support them are doing a lousy job of marketing their product in the face of lab-grown competition.

Lab-grown producers are running circles around them.

There’s a new, younger bull in the paddock

Here’s the thing, the mine-origin industry has been the only bull in the paddock for the best part of 100 years now – ever since diamonds became an aspirational ‘must have’ in the ‘30s.

The mine-origin bull has had the farm all to itself. It has grown fat and lazy, trotting out the same old pick-up lines to woo the herd. (A herd that really didn’t have much of a choice anyway.)

Now there’s a new bull in the paddock.

It’s younger, more agile, has a few tricks up its sleeve and isn’t too worried about playing fair.

A portion of the herd is quite interested in this new bull. It seems to have a lot going for it. But the best the old bull can do is trot out the same old chat up lines while trying clumsily to push the new bull back out of the paddock (pleading to farmer Federal Trade Commission for help).

Now, if that sounds harsh, that may be so. But you can’t tell me it’s not true.

To date the mine-origin diamond industry and their retailers have failed miserably in their efforts to address the ‘marketeering’ of the lab-grown sector. That’s all there is to it.

What could mine-origin do instead?

Traceability, as a marketing initiative, is a step in the right direction. But like the lab-grown industry’s wanton and often unverifiable claim of an ‘ultra-low carbon footprint’, it could easily become an Achilles Heel.

Don’t get me wrong, I support traceability, but I also understand the positive implications and where the loop holes are. Most consumers don’t.

It’s also true that the traceability only applies to a handful of producers and resellers. Spruiking it too early could severely damage the wider industry and play right into the hands of the lab-grown sector. Especially as there are still huge inventories of untraceable diamonds in the system yet to be sold.

Transparency and responsibility at the retail level Our own research amongst ethically-minded jewellery consumers is suggesting they care more about people than they do carbon cost.

Ultimately, it’s at the retail level where the rubber hits the road.

Customer-facing retailers and manufacturers are the interface with the market. And the market cares more now than ever before about things like ethics, sustainability, human rights, environmental issues and climate change.

The lab-grown sector is doing a reasonable job of appealing to these wants of the burgeoning Millennial and Gen Y markets. Mine-origin however, has a lot of catching up to do.

Now, it might seem like Lab-grown is holding all the marketing cards in this game, but they’re not.

I happen to think that a great many people still really like mine-origin diamonds. The Industry just has to give them more compelling reasons not to stray over to the new bull in the paddock.

Retailers need to tell a (truthful) story consumers care about …

Answering those questions in their promotional efforts would go a long way towards winning back wandering herd members.

Back to the elephant in the room

Most of you I’m sure will have picked up on my blatant (and click-baity) corruption of the Not-all-men hashtag in the headline of this article.

I mean no disrespect to the #metoo and #notallmen movements. They’re critically important elements in much needed social change. I’ve borrowed the concept because the not-all-men message perfectly exemplifies where the diamond industry is at right now. At least in my opinion.

Just as not all men are guilty of misogynistic behaviour, not all mine-origin diamonds are compromised by the claims made by the lab-grown sector. Likewise, not all lab-grown diamonds are as squeaky clean as we’re being led to believe.

The difference here is that most people have enough life experience to know intuitively that not all men deserve condemnation. The same cannot be said about people’s experience with diamonds however. The majority of consumers don’t know what they don’t know and are open to suggestion.

The fact is, whomever is better at communicating their slant on the diamond story will gain or retain their fair, or unfair share of the herd.

Either way, there’s a big upside

As I highlighted early in this article, I’m not picking sides.

The reality is mine-origin isn’t going anywhere anytime soon, and lab-grown are having too much success to do anything other than continue full steam ahead.

What appeals to me is this vigorous ‘conflict’ is forcing both sides to lift their game. To be more transparent and become more socially and environmentally responsible.

That’s a really good thing, and we shouldn’t underestimate how important it is.

In short: Hooray for competition!